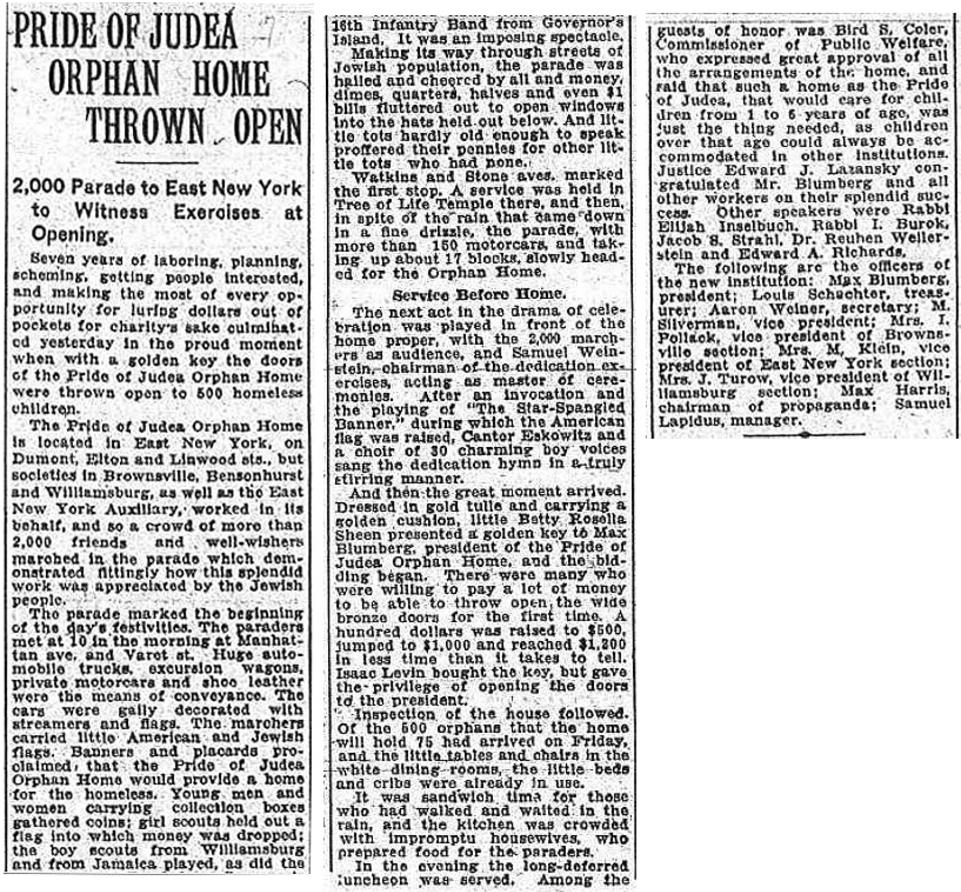 ​*More information can be found under the "About" menu or by clicking here for Population or Timeline of the PJCH.

April 16, 1923, was the official opening date for the Pride of Judea Orphan Home, located at 992 Dumont Avenue in Brooklyn’s East New York residential neighborhood. Its unique name was created by the grateful founders, many of whom were economically successful first-generation Americans, who had migrated from central and eastern European countries.

The Home occupied almost an entire city block.  Exterior grounds consisted of a concrete paved yard with basketball goals (also a wooden shed used solely for plucking freshly slaughtered chickens) and an athletic field /playground. Initially, the building consisted of two stories. In 1937, an added third floor provided for total separation of boys’ and girls’ dormitories, as well as day rooms plus several staff sleeping quarters. The main floor and basement housed: two kitchens (meat and dairy) dining room; synagogue/multi-purpose room; administrative/business offices; library; classrooms for religious instruction; an infirmary with medical/dental exam offices; clothing/shoes stockroom: and mechanical/maintenance shops. The one, very public (no booth), pay telephone was located on the infirmary entrance wall. Another popular piece of equipment was the “canteen” which, for a nickel, dispensed a candy bar or pack of chewing gum. (Proceeds went toward purchase of athletic equipment and books for the library).
The Pride’s earliest residents were infants through age five. In January 1924, the age limit was waived when  six sisters, (whose widowed mother had recently taken her life)  four to 13 years old, were admitted. This act of compassion, plus other factors, resulted in a gradual change of age range policy – minimum  five and a half years old to a maximum of 18 years.

In 1933, the name was changed to the Pride of Judea Children’s Home, an acknowledgment that:(1) many residents were not “orphans” i.e. one or both parents were physically or mentally disabled, institutionalized; separated, divorced,  incarcerated, or had abandoned their offspring and (2) the word “orphan” frequently evoked an unwarranted response of sympathy. Education, both religious (orthodox Judaism) and secular, was emphasized. Younger children attended nearby P.S. 202. Proximity to the rapid transit system (New Lots Avenue  station) as well as a liberal policy allowed for selection from approximately 15 Brooklyn and Manhattan high schools that offered the desired academic, commercial, technical or vocational course of study.

On August 8, 1933, approximately 100 children were taken on a daytrip to Rockaway Beach. The outing turned tragic when seven of the boys, ages 10 to 14, drowned in an undertow.

Max Blumberg, served as president from 1919 until his 1938 death, which occurred while making an on-the-air appeal for donations. He was succeeded by treasurer Jacob H. Cohen, who was PJCH president for the next 21 years, until the Home closed. Additionally, Mr. Blumberg’s widow, Lena, retained strong interest and involvement with the Pride’s development and operations.

For many alumni one of the most vivid Pride of Judea memories would probably be their b’nei mitzvah weekend. Beginning in the mid 1930’s, it was a “boys only” event until Mrs. Blumberg intervened and eight girls joined seven boys at the November 1948, annual affair. Regardless of gender composition, it was always an exciting two days for the participants. Traditional Saturday morning services were conducted in the Home’s synagogue with family members and friends attending. The following day  gala at the St. George Hotel featured a  political figure or an entertainer. Most of the guests were Pride’s contributors, as it was also a fundraising event. Each youngster received a copy of the bible, plus other gifts. A Sunday edition of The Forward’s rotogravure  supplement  carried a formal group photo, with names included. The boys were  attired in (rented) dark suits while the girls appeared in their newly acquired white dresses.

The 1940 federal census of the Pride recorded 188 boys and girls, a decline of 27 from 1930. During World War II, more than 100 former residents and staff members served in the military and four were killed in action. Upon reaching 18 years of age several draftees/enlistees went directly from the Home into the armed forces. On the home front, the children maintained a victory garden and corresponded with alumni friends in uniform. The resident newspaper served as a “bulletin board” for the military alumni. At weekly assemblies in the P.S. 202 auditorium, students with predominantly immigrant parents sang patriotic songs and learned “what it means to be an American” from Dr. Charles G. Eichel, inspirational school principal (who also served on the Pride’s Board of Directors). About a half dozen children from European nations were admitted. Not surprisingly, the Home endured food shortages and difficulty in hiring/retaining employees.  In 1943, Mr.& Mrs. Bernard Scharf  donated  two large Long Beach, L.I houses  in memory of their son.  The renovated buildings, in close proximity to  the  first-rate beach  and boardwalk, became an anticipated summer “camp” for the P.J.C.H. residents and staff.

Following World War II there were two notable staff/administrative title changes-"supervisors" became "counselors" while “superintendent" was replaced with "executive director". The number of admissions continued to decline and by 1950 the  population was 108. Included in that number were seven  children from six  different European countries.

By 1954 there were no new admissions. In June 1959 arrangements were made for placement of the few remaining residents and the Pride of Judea Children’s Home permanently closed its doors.

Reflecting on their childhood experiences, many former residents considered themselves fortunate that, in time of dire need, there was a place referred to  alternatively  as “The Pride”, or “The Home”.

In 1972, the organization took on a new mission as the Pride of Judea Mental Health Center which than relocated to Douglaston, Queens. In 1999 it became a division of the Jewish Board of Family and Children’s Services, an outpatient clinic with the name Pride of Judea Community Services. here.